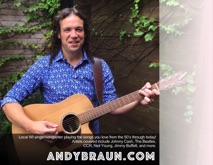 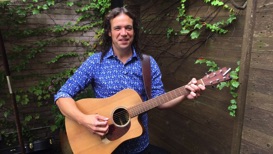 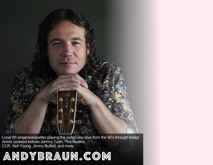 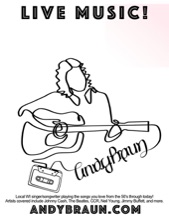 “Music has saved my life. Music has helped me through some tough times, and I hope and pray my music can do that for you.” -Andy

Andy Braun is a WAMI-nominated* singer-songwriter with a folk-rock feel. His songs feature acoustic guitar, voice, and harmonica. He plays a wide variety of cover songs as well as insightful originals. Growing up as the son of a church choir director and organist, he was singing at a very young age. His passion for music began to flourish when he started listening to oldies on the radio. Influences range from the Beatles to Neil Young to Townes Van Zandt. He started playing guitar and performing when he was in high school, and has played and sung in a variety of bands and musical groups ever since. Andy has been blessed to be full-time musician since 2007.

CHECK IT OUT HERE

*Nominated for the 2020 Wisconsin Area Music Industry (WAMI) award in the Christian/Gospel category as a part of Branches Band.